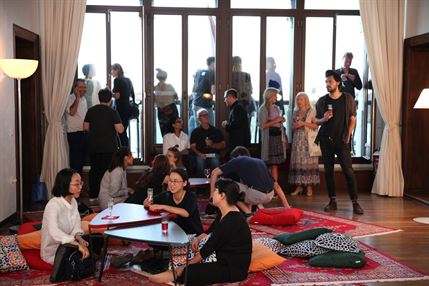 The Swiss Arts Council Pro Helvetia is pleased to announce Evelyn Steiner as next year’s Salonnière for the programme of the Salon Suisse taking place at the Palazzo Trevisan degli Ulivi during the 17th International Architecture Exhibition – La Biennale di Venezia (23 May to 29 November 2020). Evelyn Steiner will be directing and hosting the Salon Suisse in 2020 around a theme to be released soon.

Evelyn Steiner (*1981, Zug) is an architect and art historian, currently holding the position of curator at the ZAZ (Zentrum Architektur Zürich, Switzerland), where she is working on an exhibition about pioneering female architects in Switzerland. After completing her architectural studies in Zurich (ETH) and Buenos Aires, she worked in different architecture practices in Rome, Barcelona and Zurich. In 2012, she received a Master of Arts in Art History at the University of Berne with a special qualification in Curatorial Studies and Museology. She then moved to Frankfurt to work at Deutsches Architekturmuseum (2012-2014). From 2014 to 2016 she was curator at the S AM (Schweizerisches Architekturmuseum) in Basel, where she curated the exhibitions «Constructing Film. Swiss Architecture in the Moving Image» and «Aristide Antonas. Protocols of Athens», among others. Afterwards, she worked as a freelance curator and writer, and as an assistant lecturer at Hochschule für Gestaltung Basel at the Institute of Interior Design and Scenography.

Organised every year by Pro Helvetia, the Salon Suisse runs concomitantly to the exhibition at the Swiss Pavilion during both the Biennale Arte and Biennale Architettura. Consisting of a series of talks and other cultural events, the Salon Suisse provides an opportunity to further investigate and experience art and architecture in a reflective, participative and casual atmosphere.