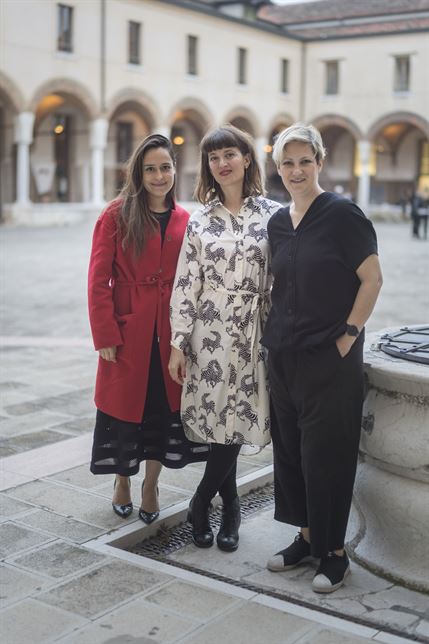 After a successful launch of the Salon Suisse  s l o w  coinciding with the opening of the 2019 Venice Biennale, the programme continues with three autumn salons in 19-21 September, 17-19 October and 21-23 November 2019. For this year's Salon Suisse, the Salonnière Céline Eidenbenz (middle) with her co-Salonnières Victoria Mühlig (left) and Anja Radomirovic (right), were interested in questioning the rhythm of creation and its intrinsic slowness in a time governed by productivism and rapidity.

In the middle, Céline Eidenbenz, director of the Museum of Art in Valais in Sion, Switzerland. After completing her studies in Lausanne, Vienna and Paris, Céline Eidenbenz worked as an assistant lecturer at the Universities of Geneva and Lausanne (2007–2015) in Switzerland, where she founded «Le Cabanon», an exhibition space for contemporary art in Lausanne. In 2012, she used her PhD thesis as the basis of an exhibition about 'hysteria' at the Museum Félicien Rops in Namur, Belgium. In 2016, she completely transformed the Valais Art Museum’s display, assembling artworks and objects from different periods and media. In 2017, she curated the exhibition «Let’s Walk, Take a Step, Take a Stand» at the Penitentiary of Sion, integrating contemporary art with local creation and the museum’s alpine environment.

On the left, Victoria Muhlig is curator at the Musée d'art de Pully in Switzerland, where she oversees exhibitions of contemporary art and photography. She holds master's degrees in art history and public management. From 2014 to 2017 she was commissioner of the Manor Valais Cultural Prize. She is a member of the committee of the Swiss association for contemporary photography, and has been in charge of projects for the Nuit des Images in Lausanne (2015) and the Mulhouse Biennial of Photography in Mulhouse (2016).

On the right, Anja Radomirovic is an architect, designer and architecture historian based in Venice. She studied architecture at the IUAV University in Venice, where she also received her doctorate in the history of architecture and urbanism. Her research focuses on the 20th century Italian and Venetian architecture. She used to be Professor of Venetian architectural history at the Northeastern University Venice Summer Program, and more recently worked for the Biennale Arte (2016-2017), following the Open Table programme during the exhibition «VivaArteViva» (2017), curated by Christine Macel.