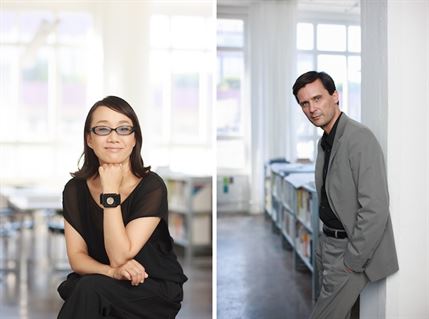 Biennials
Hiromi Hosoya and Markus Schaefer established Hosoya Schaefer Architects in 2003. The office specializes in architecture, urban design and research. It has worked on a wide spectrum of international projects including a 230-ha masterplan in Ljubljana, an office building and a department store in Milano or train stations in Toronto. It recently was awarded a Red Dot Grand Prix for Mobiglobe, a research and communications project on sustainable mobility for Autostadt, a subsidiary of Volkswagen. In Switzerland, the office won first-prizes for the Airport Engadin and Warmbächliweg, a housing development in Bern, and now has its first architectural projects under construction. In 2011, the office concluded a regional study "Metrobild" for the Metropolitan region of Zürich and several urban design studies and projects throughout Switzerland. In 2012, Hosoya Schaefer Architects organized the professionally and publically acclaimed symposium, "Learning From Tokyo" at the Architecture Forum in Zurich and published its findings in cooperation with the magazine Arch+. A combination of academic work, project practice and research for clients allows the office to develop and refine a solid, systemic and innovative understanding of our urban future.

The office has thirteen employees from the fields of architecture, urban design, scenography and art history.

Hiromi Hosoya is a founding partner of Hosoya Schaefer Architects AG, Zürich. She has a Bachelor's Degree in English Literature, Fine Arts, and Architecture as well as a Masters degree in Architecture from Harvard University Graduate School of Design. After working for 5 years in international trade for a large Japanese conglomerate, she studied architecture at the Rhode Island School of Design and at Harvard University under Rem Koolhaas, where she participated in co-publishing the book "Harvard Guide to Shopping." Afterwards, she worked for five years for Toyo Ito & Associates Architects in Tokyo until co-founding her own office with Markus Schaefer in 2003. She has taught interdisciplinary design studios at Cornell University in 2005 and 2006 and was a professor at the Academy of Fine Arts, Vienna, Austria from 2007 to 2012. She also taught an advanced option studio at the Harvard University Graduate School of Design.

Markus Schaefer has a Masters of Architecture from Harvard University as well as a Masters of Science in Neurobiology from the University of Zürich. At Harvard, he participated in co-publishing the book "Harvard Guide to Shopping" with Rem Koolhaas. From 1999 – 2003 Markus Schaefer worked for OMA in Rotterdam, the final two years as a director of AMO in Rotterdam – the think-tank and research department of OMA. He was a guest professor at the Berlage Institute in Rotterdam (2005 – 2006) and a professor at the Academy of Fine Arts in Vienna (2007 – 2009). He lectures and publishes regularly and is also co-founder and head of research at CityTrackerX AG, a privately-funded start-up aimed at understanding the dynamics of cities and urban regions.