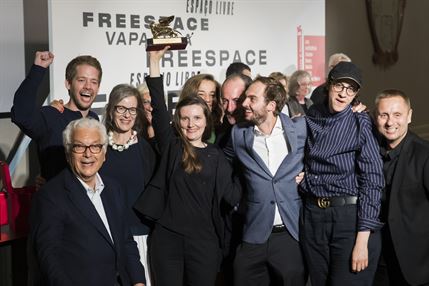 The Swiss Arts Council Pro Helvetia is delighted to announce that this morning the Swiss Pavilion has been awarded the Golden Lion for best national participation at 16th International Architecture Exhibition – La Biennale di Venezia. This internationally renowned award is for the first time given to the Swiss Pavilion. The Golden Lion distinguishes the exhibition Svizzera 240: House Tour presented by the young team of ETH architects, consisting of Alessandro Bosshard, Li Tavor, Matthew van der Ploeg and Ani Vihervaara. “This is an extraordinary success for the young team of architects and underlines the top class of Swiss architecture”, says the President of the Swiss Confederation Alain Berset, who opened the Swiss Pavilion yesterday.

The Swiss Pavilion, entitled Svizzera 240: House Tour, wins the Golden Lion for the best national participation, one of the most prestigious awards dedicated to architecture in the world. The young team of architects from ETH Zurich, Alessandro Bosshard, Li Tavor, Matthew van der Ploeg and Ani Vihervaara, and the Swiss Arts Council Pro Helvetia, commissioner of the exhibition, received the award at the official opening of the 16th International Architecture Biennale in Venice this morning. The decision was made by the members of the international jury, composed of Frank Barkow (United States), Sofia von Ellrichshausen (Chile), Kate Goodwin (Australia), Patricia Patkau (Canada) and Pier Paolo Tamburelli (Italy). The jury itself is appointed by the Board of Directors of the Venice Biennale chaired by Paolo Baratta, upon recommendation of curators Yvonne Farrell and Shelley McNamara.

The team of Svizzera 240: House Tour on the award: "We are extremely excited to receive this Golden Lion for our exhibition at the Swiss Pavilion after having won a public competition. Svizzera 240 is about looking at empty flats. We want to take the visitors on a house tour, which offers you an exaggerated architectural sensibility through which you see the peculiarities of your own home from the perspective of an outsider. We very much hope that this opens up new ways of reflecting on the role the apartments’ interior shell plays in shaping our lives and our identities."

The Swiss contribution was selected in a public competition by Pro Helvetia's directorate on the recommendation of an independent jury. "I am very pleased with the award for Svizzera 240: House Tour - it acknowledges the great technical precision also in terms of content and the spatial quality of the contribution and is certainly a great day for Swiss architecture", says Philippe Bischof, Director of the Swiss Arts Council Pro Helvetia.