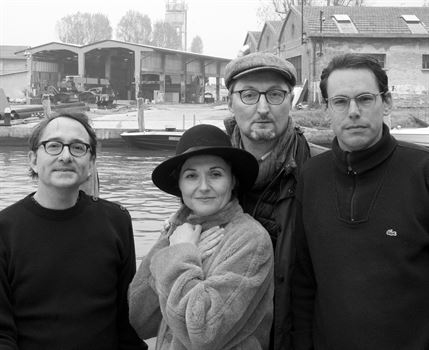 The events will tackle the importance of the disciplines bordering architecture, such as art, film, literature, urbanism, philosophy. Using the metaphor of a sailing expedition which stops in different islands (i.e. disciplines), the «Salon Suisse» hopes to open up the discourse surrounding the architecture of the 21st century.

Marcel Bächtiger
Born in St. Gallen, Switzerland, in 1976 Marcel Bächtiger studied architecture at ETH in Zurich. Since graduating in 2002, he has been working as a filmmaker, lecturer and editor at Hochparterre, a renowned Swiss journal of architecture. His research interest focuses on the relations between the imaginary and architectural space in both theory and practice. In his doctoral thesis ‘Augen, die anders sehen’ (Eyes that see differently, 2017), he analyses the cinematographic foundations of Le Corbusier’s architectural concepts. Marcel Bächtiger lives and works in Zurich.

Tim Kammasch
Born in Berlin, Germany, in 1967 Tim Kammasch finished his PhD in Philosophy at the University of Zurich in 2001. Before that, he was Assistant at the Chair of Prof. Dr. Kurt W. Forster (Architecture and Art History) at the Institute of History and Architectural Theory at ETH and worked on several exhibitions at the Zurich Art Museum, in collaboration with Guido Magnaguagno and Juri Steiner. He also was part of the founding team of trans, the architectural review of the Department of Architecture, Zurich. From 2005 to 2007, he was a Lecturer and Assistant-in-Chief at the Department of Philosophy at Zurich University. Since 2008, he has been Professor for Cultural Theory of Architecture at the Joint Master of Architecture at the Berne University of Applied Sciences. Tim Kammasch lives and works in Zurich.

Stanislas Zimmermann
Born in Bern, Switzerland, in 1970 Stanislas Zimmermann studied architecture at EPFL in Lausanne under Luigi Snozzi, Miroslav Šik and Martin Steinmann. After graduating in 1996, he and Valérie Jomini set up the architecture office Jomini & Zimmermann and the furniture label it design, going on to realise numerous architectural and design projects. Since 2009, he has been a Lecturer for the Joint Master of Architecture programme at the Universities of Applied Sciences in Berne, Fribourg and Geneva. Stanislas Zimmermann lives and works in Zurich.

Laura Tinti
Born in Decimomannu, Italy, in 1977 Laura Tinti is a designer of functional installations and projects for public space. She studied Italian Law before doing a Bachelor of Fine Art Painting in Florence and a Master of Visual Art at IUAV University of Architecture Venice in 2015. She was Assistant at both the Academy of Fine Arts in Florence and IUAV University from 2016 to 2017. Since 2015, she has been the Senior Art Educator at the Fondazione della Biennale di Venezia and a Professor of Visual Art & Fashion at Polimoda Institute for Fashion Design in Florence. Laura Tinti lives and works in Venice.