»The Water Tank Project: Public Art and Advocacy«
Slated for the summer of 2013, The Water Tank Project will transform the New York City skyline with the aim of raising awareness of the global water crisis. Carefully selected water tanks in all five boroughs of the City will be wrapped in art on the subject of water as a precious and endangered resource. Leveraging the transformational power of art and technology, The Water Tank Project is a case study in how public, site-specific art can serve as a platform for social advocacy. 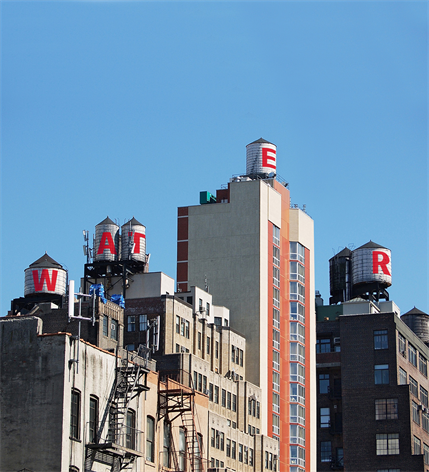 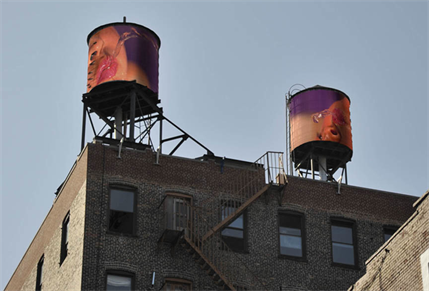 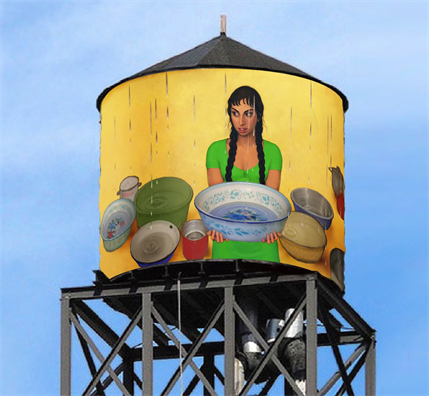 WORD ABOVE THE STREET, Founder and Creative Director 2010-today
Founded in 2010, Word Above The Street, Inc. (WATS) is a 501(c)(3) charitable organization that pioneers fresh approaches to environmental and social advocacy in order to produce visionary exhibitions that have the power to change the world. As a landmark public art initiative set to transform the New York City skyline next summer, The Water Tank Project is the inaugural venture of Word Above the Street. The project is the recipient of a 2012 NYC Cultural Innovation grant from the Rockefeller Foundation, and grants from the Ford Foundation, the Agnes Gund AG Foundation and the Lily Auchincloss Foundation, among others.

THE KAU ACADEMY AND ART CENTER, Creative Director Founder 2007-today
The primary mission of Kau Academy is to support established and emerging artists working in a variety of media. The Academy is housed in the newly renovated Kõue (or Kau) Manor in Estonia, near Kose in Harju County, just outside Tallin, the capital city. The historic Manor is a special retreat for art making, collaborative projects and scholarly discourse.

BURMESE TEA CEREMONY, Chief Curator 1999
Reviewed by Nathan Shedroff in his book Experience Design as being one of the top 100 experiences

Mary Jordan began working in production at the age of 16, after attending the Norman Jewison film school. By the age of 20, she was producing for Canada’s top new directors, such as Steve Chase, Marco Brambilla, Curtis Wehrfritz as well as for leading production companies like Revolver, The Partners, Alliance and Nitrate Films. During this time, she traveled across North Africa to shoot her first documentaries and short pieces on female circumcision rituals and the cultural modernization of women in the area, which would later be acquired by the BBC. After extensive travels, Jordan settled in Sydney, Australia, where she continued her documentary work on projects such as ABC’s Tribal Music of Tonga and was awarded by ABC News for her bravery while documenting refugee camp conditions on the Thai-Burmese border for Médecins Sans Frontières. While in Sydney, Mary worked as a talent scout as well as founded, and later sold, the production company Indigo Blue within which she produced and directed commercials and music videos. Jordan’s film Jack Smith and the Destruction of Atlantis, received its World Premiere at the Tribeca Film Festival in 2006, and is to date her best known and most recent feature length work. An Official Selection at a score of film festivals around the world, it received the Best Documentary prize at Turin’s Gay & Lesbian Film Festival (2006), and 2006 Jury Awards both at Tribeca and the Leipzig Dokfest. In 2006, Jordan was named by Filmmaker Magazine as one of their “25 New Faces of Independent Film”.

THE ANGELS OF LIGHT, Writer/Director/Producer (currently in post production) 2010
In a historical moment of national transformation, a troupe of psychadelic costume-clad sexual pranksters transmutes the political and cultural revolution of the sixties into a new kind of theater — one without limits. The film Angels of Light will be featured at the Museum of Contemporary Art Dever’s upcoming exhibition, West of Center: Art and the Counterculture Experiment in America, 1965-1977. This exhibition will subsequently tour in the US to MCA Denver, SMoCA, JSMA, and MCAM and globally to Cultural Centre in Nizhni Novogorod and The Garage in Moscow.

MY AFTERLIFE, Writer/Director/Producer 2008
Documents the perseverance of a Tibetan monk and nun, who through their dedication to His Holiness the Dalai Lama, overcome the horrors of Chinese political oppression and human rights abuses. Producer Michael Perlman. Post production World2be. The film is currently broadcasting on television and screening at film festivals worldwide. Awarded best spiritual Documentary 2008.

THE CLOWN, Producer 2009
A short film about a young boy who remembers the horrors of his youth and how his parents were killed. He joins a circus caravan and goes back to avenge his parents’s death. Winner of Screamfest LA.

85, Writer/Director/Producer 2009
A short experimental film about an all American family in the future who survive on Oxygen tanks. Eventually the family dies due to the lack of human nurturing and love.

BABA AND ME, Writer/Director/Producer/DOP September 2007
Personal growth, the nature of reality and state of our world revealed through conversations with a Hindu Sadhu. Beginning with the world’s largest human pilgrimmage, the Kumbh Mela, Jordan traveled up the Ganges river to visit temples in ancient Hindu sacred cities. Self-produced (post-production).

THE LAST SUPPER, Consulting Producer 2006
Alice Neel was one of the great portrait painters of the 20th century.
She reinvented the genre of portraiture by expressing the inner landscape of her varied sitters, among them Andy Warhol, Annie Sprinkle, Bella Abzug, and Allen Ginsberg. Painting a diverse cross-section of humanity, from Communist Party leaders to art world personalities to her neighbors in Spanish Harlem, Neel created a body of work that serves as a social document of New York and America in the 20th Century. The film tells the story of Neel’s life, exploring the struggles she faced as a woman artist, a single mother, and a painter who defied convention.

CAN IT!, Director/DOP 1995
Documented the success of the Tongan King’s programs to reduce obesity in his kingdom, which had resulted from a surge of canned foods availability across the islands. Acquired by ABC and SBS, Producer His Excellency Tupouto’a-Tungi, Kingdom of Tonga.

QUIET POWERS, Writer/Director/Producer/DOP 1992
Documented the impact of Western culture to the traditional roles of Muslim women across northern Africa from Morocco to Egypt. Acquired by ABC and PBS. Self-produced.
Documentary of the Fez Sacred Music Festival (Tripod Productions, 2003) Documentary of the Theravada Buddhist and Tibetan monks, including His Holiness The Dalai Lama (1998–2001).